Chris Tucker works for Lloyds Banking Group’s Risk Division and is also a charity mentor. When he’s not working for the bank, he is helping and mentoring charities funded and supported by Lloyds Bank Foundation for England and Wales. Read his blog below on his top 5 lessons learnt as a mentor: 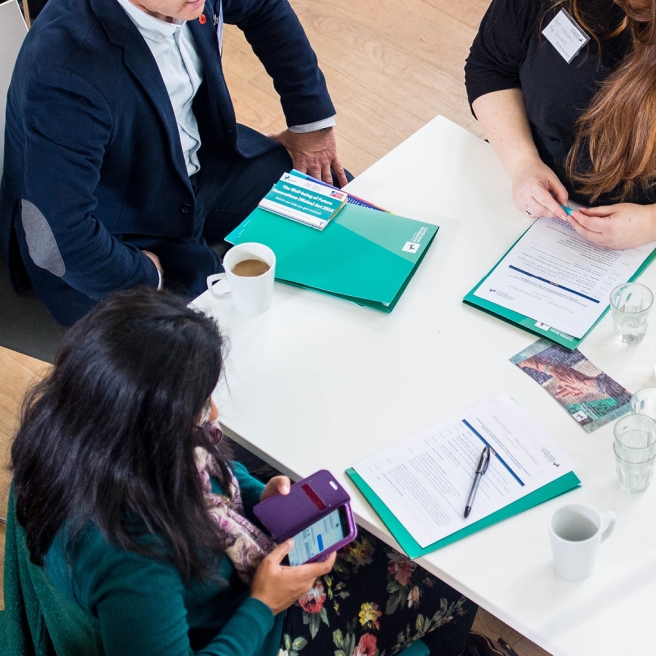 I’ve had the privilege of working with two very different charities in the last four years through Lloyds Bank Foundation’s mentoring programme. Firstly for Trailblazers who help rehabilitate young offenders and now Choice in Hackney who support disabled people to live independently. By working directly with small charities, we can help them make an impact in their local communities. Here are the top 5 lessons I’ve learnt as a mentor.

Some people might like a structured agenda, but I’ve found that the charities I help prefer a more informal style and so we simply go with the conversation on the day. You’ll probably have a few topics that come up each time anyway like funding, so you’ll always have a few triggers and handrails there if you need something to focus conversations.

2) Let them be the judge

As a mentor, there is a common risk that you think “what do I know?” or “what can I possibly tell them?” Some aspects of impostor syndrome can easily slip in. The key thing for me is to firstly back yourself; you have plenty of experience and skills, and secondly let the charity decide and be the judge of the value you are adding.

3) A chat can be a result in itself

Early on in the relationship, I would worry that we’d had a good chat for an hour or so but we weren’t achieving enough. What are the desired outcomes? what are the action points? I was almost applying a Lloyds Banking Group meeting mindset to these conversations. It took a while for the penny to drop for me before realising that often the mentee has no time to talk things through, to think and plan, and kick around ideas on a day-to-day basis. So having an hour to do that with me once a month or so is actually very useful for them.

4) Someone has been asked the question before

In my first mentoring meeting, the charity said they need help to find a new treasurer as the outgoing one was still a bit bruised by the breakdown in relationship with a previous accountant. I thought ‘what have I got into here?’ I had never been in a situation like this. But the reality is that it’s highly unlikely you’ll be asked a question that another mentor hasn’t heard before so use your network. Connect with more experienced mentors through Lloyds Bank Foundation and Lloyds Banking Group for guidance.

Depending on your background, you will have probably employed more people than your mentee or have more experience managing change, projects and risk. A lot of the skills and knowledge Lloyds Banking Group mentors might take for granted can be highly valuable for a charity which will know how to help service users and clients amazingly well but may be less well-versed in some of the disciplines and practises mentors are familiar with. Never underestimate the knowledge you can share.

Dave Moore, Lloyds Banking Group Relationship Director for SME Banking (Leeds) and charity mentor, writes about the value of mentoring, why he does it and how it can benefit small and local charities for National Mentoring Day. Read his blog below:

Mentoring – really? How could this possibly help me and my charity?

That’s a fair question. Before I became a mentor specifically supporting charities, I had already undertaken training to develop my mentoring skills to support entrepreneurs here in West Yorkshire.

The entrepreneurs were often starting a fledgling business with terrific ideas and enthusiasm but with limited budgets to spend on much-needed guidance and commercial expertise. Nonetheless, they had a huge thirst and hunger for knowledge that could help take them to the next step on their business ladder to success.

Having spent some 40 years in the financial world learning how to support business owners to grow and develop their people and systems, I have found mentoring to be a very natural extension of what is my normal working day.

I remember my first introduction to a Leeds-based charity supporting victims of domestic abuse. I met with their director and was amazed and delighted to see many of the challenges the charity faced were so similar to those I saw and heard about every day in the small and medium-sized enterprise and business world I worked in.

At the beginning I met with the charity’s director face to face every month, discussing many topics including the effectiveness of the board (or more accurately the need for the board to be even more effective) and often matters that had a financial aspect. For example, should the charity invest in a particular project or how should the charity adapt to the changing economic backdrop.

As a mentor, we’re not a coach but rather someone that can provide an unbiased view based on their experience to help guide and be a critical friend at times. We listen, support, challenge, suggest and introduce the charity to a wider network when appropriate. By doing this, I believe we can help shorten the time a charity takes to make critical decisions while potentially gaining a broader perspective to help with their decision-making process.

In summary, an introduction to a Lloyds Bank Foundation mentor can lead to a life-long confidante for the organisation’s director and, in my case, a permanent Trustee! Being a mentor is hugely rewarding, challenging in a good way and very occasionally frustrating. But most of all, I feel as though I am giving something back to the local community and making a difference to fantastic causes at the same time. It’s definitely a win for all parties.