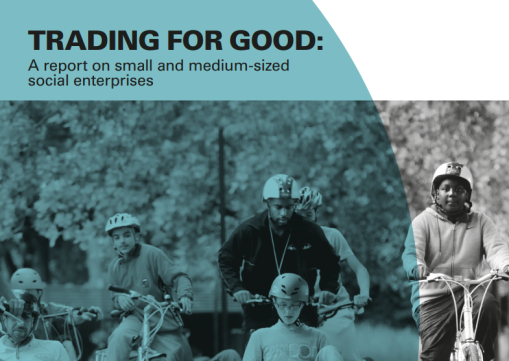 The words ‘social enterprise’ conjure up a mixed response for charities we fund. For some, their emergence brought the hope of sustainable funding; the funding answer they’d all been looking for but which never quite delivered and instead demanded a lot of additional resources. For others they’ve provided an avenue to grow income and better meet their charitable objectives.

To learn more about their role in local communities, we’ve funded the Trading for Good report by Social Enterprise UK, published today, which takes an in-depth look at social enterprises with an income under £1m.

It also looks at the core stats: who works in them and where they get their money and this paints a really rich picture about the trends they buck around ethnic diversity and gender equality.

The report also shows the importance of statutory funding for small social enterprises. It is the main source of income for 31% of those in the most deprived areas. It’s the smaller social enterprises in these areas that are most likely to be reliant on grants and public sector trading for their income, and of course we know statutory funding systems are stacked against smaller providers.

But if they’re not all self-sustaining, why should they survive?

Although it’s often assumed that social enterprises are there to provide new, more sustainable sources of income, their value is actually more wide reaching.

As the research shows, they have an important role in communities supporting cohesion, and providing training and work experience that makes people ready for employment.

If they can’t survive the cuts, local communities will notice the hole that’s left.

That’s why grants are so important. We’ve been shouting about the importance of grants for some time, through campaigns like Grants for Good. We are a grant-maker after all. Trading for Good shows they’re not just vital for small charities. They’re vital for small social enterprises too.

Grants from the UK and Europe play a more significant part in the income mix for social enterprises in the most deprived areas. As quoted in the report, “Put simply, market-based solutions are more difficult in areas of market failure.”

For us, this is worrying. We know that grants are reducing. We know that changes to local authority funding mean more deprived areas are set to get poorer. And we don’t know what will happen to old ‘European’ funding streams after Brexit. But we do know that communities need small social enterprises to make them stronger.

They’re particularly important in more deprived areas – the statistics show that social enterprises are more likely to be operating in these areas than their registered charity counterparts.

So what can be done?

At the macro level, we need Government to recognise that it’s far harder for a local area to generate more income if it’s starting from a lower base. It’s set to get even harder too as European funding disappears. So government funding has to be made available to the areas that find it hardest to generate their own. This applies to independent funders too. We need to find better ways to make sure funding goes beyond London and the South East.

At a local level we also need commissioners to ensure funding reaches those small and local organisations operating where they’re needed most, whether they are small and local charities or social enterprises. As we await consultation on the new Civil Society Strategy, this report gives us a helpful insight into the value small social enterprises bring to communities, and how we can ensure that like small charities, they can survive and thrive too.